In 2012, Anne Lilly completed the artist-in-residence at the Art Institute of Boston, and Galerie Swanström presented Lilly’s precise kinetic sculptures at SCOPE Art-Fair during Art Basel in Miami.  In 2011 Lilly was awarded the Blanche E. Colman grant, and in 2010 was nominated for James and Audrey Foster Prize of Boston’s Institute of Contemporary Art. She has created public artworks for the Mount Auburn Cemetery in Cambridge, MA, the City of Boston’s ParkArts program, and the Fort Point Public Arts Series. Her work was included in the 2007 DeCordova Annual Exhibition, in Lincoln, MA, has been collected by the DeCordova Museum, the Middlebury College Museum of Art, and is held in corporate and private collections internationally. Through competitive selection in 2005 she was awarded a public commission for a large scale sculpture on the Boston Harbor. The Boston Globe named her 2003 FPAC exhibition one of the ten best exhibits of the year.

Lilly pays lavish attention to each piece of sculpture, completing one piece at a time, taking many months to finish to meet her own meticulous standard. Instead of sketching out the sculpture's concept and working out the mechanics on paper first, she said her process is actually quite intuitive, through a trial of reconfiguring and refining that she refers to as "Do-Think-Do".  - Frank W. Liu, artscope magazine, January 2013

Anne Lilly’s captivating stainless steel sculptures...are so intricately engineered they appear to do magic. Tall rods rising from cylinders planted on gears rush toward each other, bowing, then fall away in one fluid motion. Rotating grills look like they’ll collide, then they miraculously pass. The movement of each sparely designed piece is full of grace and surprise. - Cate McQuaid, Boston Globe, August 2007

Anne Lilly employs opposing modalities -- analytical and intuitive, rational and emotional -- Lilly's sculptures elicit new connections between the physical space outside ourselves and our own private, psychological domain. They are usually fabricated in machined stainless steel, but require the viewer's touch to initiate movement: pressing clinical qualities against the sensuous response of each piece. 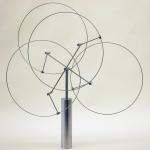 Beth Swanström curates Galerie Swanström and created ArtScout® Widening the Lens into the World of Art and Design! More About Beth

Latest from the Blog